Dontnod Entertainment (stylized DONTNOD Entertainment) is a independent developer based in Paris, France. The company was founded by former Criterion Games head, Oskar Guilbert in 2008.[1] Their first game and AAA release was the third person action brawler, Remember Me.

Dontnod Entertainment was co-founded by Hervé Bonin, Aleksi Briclot, Alain Damasio, Oskar Guilbert and Jean-Maxime Moris in June 2008 along with other ex-Criterion, Ubisoft and EA staff.[2][3]

Prior to its conception as Remember Me, Dontnod's first game was developed under the title Adrift. The game's background was that of a flooded Paris that would have to be traversed on water and across the rooftops of buildings. Dontnod was originally involved with Sony Entertainment. Adrift was intended to be a PlayStation 3 exclusive, however, creative differences resulted in the end of Dontnod's relationship with Sony. Adrift was scrapped and re-conceptualized as Remember Me. During development of the game the developers faced difficulty in finding a publisher who was happy to publish a game with a female lead character, with some saying the lead character needed to be male for it to succeed.[4]

Remember Me was officially announced during the 2012 Gamescom event, where it was promoted with two stage demos. It was originally slated for a May 2013 release, but was pushed ahead to June. Remember Me released June 3, a week before Naughty Dog's post-apocalypse game, The Last of Us.[5] Under-promoted by Capcom, it received little attention and mixed reviews from critics and users.[6][7]

January 31, 2014, Gamasutra reported that multiple French media outlets reported that Dontnod Entertainment filed for the French equivalent of bankruptcy, "redressement judiciaire". However, Dontnod CEO, Oskar Guilbert, stated that the company did not file for bankruptcy. "There is no bankruptcy, Dontnod is not in bankruptcy... We are in something called in France 'judicial reorganisation' which allows us to re-adapt our production pipeline to the new situation."[1][8]

Dontnod has turned to public funding to finance their newest Intellectual Property, originally titled, What If?[9] Guilbert stated, "We started new projects and those new projects need some investment and we decided to resize the company in order to match these new needs. That's why we needed judicial reorganisation."[1] June 2014, gaming website IGN.com announced that Dontnod Entertainment was collaborating with Final Fantasy developer, Square Enix, on a new property for "digital platforms".[10] Source, develop-online.net never clarified whether or not the exact nature of the game with regards to whether or not the game was a new intellectual property or otherwise noted.[11][10]

Later, during Gamescom 2014, Square Enix officially announced the title's name, Life Is Strange.[12][1] According to Jean-Maxime Moris, the game is a point-and-click adventure game styled similarly to that of The Wolf Among Us and Walking Dead.[13] Thus far, the previews of the game have been favorably compared to Gone Home, another point-and-click game, primarily on account of the suggestion that the relationship between the two characters, Max and Chloe, could be viewed as a romantic.[14] The first episode of Life Is Strange was released across all available consoles and PC, January 30, 2015.[15]

Shortly after the official announcement of Life Is Strange, Gamespot.com announced that DONTNOD was collaborating with another publisher to create an RPG for the Xbox One and PlayStation 4. According to the French jobs site, emploi.afjv.com, Dontnod was searching for "an experienced game/level designer with a strong RPG/ARPG background to work on a new project for the consoles".[16][17][18] January 20, 2015, Dontnod officially announced their collaboration with Focus Home Interactive and the title of their next game, VAMPYR, a game focused a doctor who becomes a vampire after he is bitten by a patient thought to have the Spanish Flu.[19][20][21] 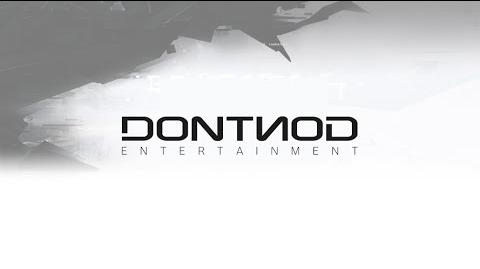 Dontnod Entertainment Logo featuring the Conception Cube from Remember Me.

Dontnod Entertainment logo circa 2015.
Add a photo to this gallery