Episode 0: Rebirth/Reboot is the first level of Remember Me.

Trapped deep within the bowls of La Bastille, an amnesiac Nilin must follow the voice of a mysterious man in order to obtain her freedom or suffer certain death the hands of her captors.

An elderly woman describes herself as the only survivor of a incident that sank her boat, killed her husband and several other refugees of the European Civil War. She describes the feeling of holding onto her husband's hand as she reached shore. A young woman describes the first time she and her boyfriend shared their memories. She described being afraid, but embracing the love received from his memories and how every day since that moment was "their first day".

Another refugee recounts when he and several children were escaping Paris,and the smell of burning plastic. He notes that, during their escape, no one on either side of the conflict opened fire, a sign that the war was over. The commercial ends with the reassurance that the memories spoken of would be safe and secure with the help of the Sensen.

Deep inside La Bastille, Nilin is being tortured by the doctors of the Bastille. Undergoing the final process of a memory wipe, Nilin can barely stand as the process is completed. A doctor approaches her and inquires about what she knows. She remembers enough that she can recall her name, which troubles the Bastille doctor. He contacts Sebastian Quaid and informs him of the resistance Nilin put up against the memory wipe process.

Quaid orders the doctor to "complete the substitution protocols", he would "remove the last barriers" of Nilin's resistance personally. Nilin is scanned by a surveillance droid for cognitive functions and ordered to follow the yellow line toward the final process of the memory wipe. After falling in line, Nilin watches as the memories of prisoners ahead of her are forcibly removed from their sensen's. As she waits her turn, a mysterious voice contacts her. When she responds, the voice tells her that he plans to create a diversion to allow her to escape.

The power shuts down and the voice tells her to move toward the open door on her left. She follows his orders and slips under the door to apparent safety. However, when she ventures further into the room, the security protocols detect her presence and activate the Bastille's "cohesion unit", the Zorn. Nilin runs for her life as the Zorn peruses her through the hall. The voice instructs her to take a passage on the right, Nilin jumps down the vent just as the Zorn moves to pounce on her.

Below, she lands in another part of the prison. The voice instructs her to keep going. Venturing further into the unexplored area, she comes across a system of machines packaging dead bodies inside caskets and transporting them elsewhere. The voice tells her to climb inside one of the caskets. Reluctant, Nilin pulls a wrapped corpse from the next available casket and climbs inside, hoping the events transpiring around her are a "nightmare". The casket is then shot up into a tube and away from the prison. 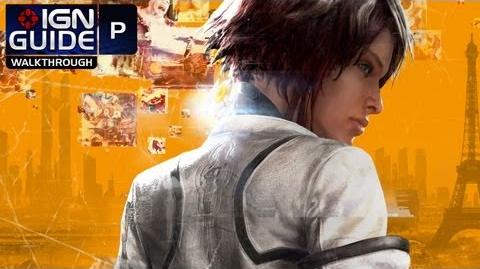 Retrieved from "https://dontnodentertainment.fandom.com/wiki/Episode_0:_Rebirth/Reboot?oldid=9304"
Community content is available under CC-BY-SA unless otherwise noted.