"My life story is still riddled with holes. Shadows upon the canvas of my life."

This Remember Me article is a stub. You can help DONTNOD Entertainment Wiki by expanding it.

"If you shut the door to all errors, truth will be shut out."
—Rabindranath Tagore[1]

Episode 3: High Tension/Deep Exit is the fourth level of Remember Me.

In the aftermath of the flood that devastates the Saint-Michel district, Nilin returns to the Leaking Brain in order find Johnny Greenteeth, a man who "remembers what most people choose to forget". During her journey she encounters a Zorn who blocks her way into the sewers that will lead her back into La Bastille prison.

"Using the architect codes I'd stolen, Edge sabotaged the Saint-Michel Dam, flooding the confrontress. According to him it was just deserts for those who only worried about their own comfort. Why did I do what he asked? I could've left the city. Invented myself a new life somewhere else. But I wanted to come back to being public enemy number one. Was it part of who I am? Have we brought justice to the outcasts of Slum 404? Or have my actions condemned them to more suffering? Only a militant believes the ends always justify the means. Edge revealed to me that my memory had been conserved in the Fortress of the Bastille since my conviction. I have to go there and recover my true self. The only way to get into the Bastille is with the memories of Johnny Greenteeth. A 'colorful' resident of Slum 404. The problem is no one knows who he really is or where he hides out. "
—Nilin Cartier-Wells

"At 10:41 this morning, sirens blared throughout the entire city when the Saint-Michel Dam suddenly opened, releasing billions of liters of water from the Saint Louis artificial lake into the peaceful Saint-Michel District. As you can see on these Sensen images, the gigantic wave swallowed everything in its way. The scale of this catastrophe is difficult to imagine at this time as the Neo-Paris authorities are already reporting dozens dead and several hundred missing. On the other side of the dam, the sudden lowering of the water level has not gone without consequence for the inhabitants of Slum 404, a neighborhood well known for ongoing social unrest. The S.A.B.R.E Force has been immediately deployed in and around the area to contain any potential riots. Indeed, the now empty Saint Louis lake has put an end to the isolation of the Bastille fortress, home of the most dangerous criminals of Neo-Paris. Stay tuned for more."
—Perky Maggie, Plati News

Return to the Slums

Nilin vs. the Zorn II 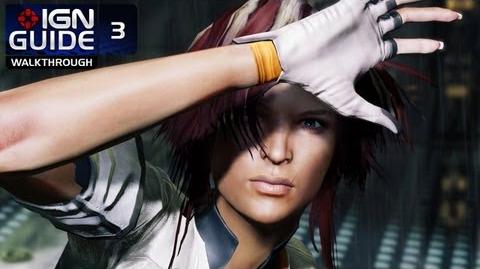 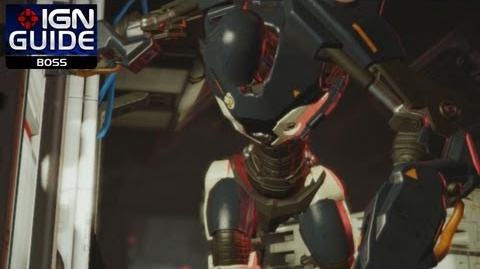 Retrieved from "https://dontnodentertainment.fandom.com/wiki/Episode_3:_High_Tension/Deep_Exit?oldid=16792"
Community content is available under CC-BY-SA unless otherwise noted.